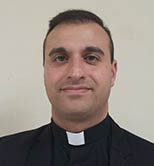 Fr Blake Camilleri was born on the 8th of May 1984 and comes from the parish of Hal Balzan. He received his primary education at Stella Maris in Hal Balzan, and his secondary education at the Archbishop’s minor seminary at Tal-Virtu’ in Rabat. He continued his studies at the Faculty of Theology where he obtained his Bachelor of Sacred Theology and also his Licientiate in Pastoral Theology.

Fr Blake was ordained to the priesthood on the 23 of June 2010. His was first assigned as a deacon to work in the parish of The Assumption of Mary in Mosta, wherein later on he also became the vice-parish priest of the same parish.

Later on Fr Blake also studied for two years at the Accademia Pontificia Ecclesiastica in Rome.

Before he was appointed parish priest of the parish of Mary Immaculate, Mother of the Church in Ibrag, he also served as a vice-parish priest for seven months in St Philip’s Parish in Haz Zebbug. 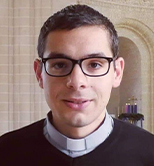 Fr Osmar Baldacchino was born on the 14th of December 1994 and comes from the parish of St Nicholas of Bari, Siggiewi. He received his primary education at Patri Guzè Delia primary school, Siggiewi, and his secondary and post-secondary education at St Aloysius College. He continued his studies at the Faculty of Theology where he obtained his Bachelor of Sacred Theology and also his Licentiate in Pastoral Theology.

Fr Osmar was ordained to the priesthood on the 29th of June 2020. He was assigned as a deacon in St Sebastian Parish, Hal Qormi, where eventually he served as a priest for a year and a half.

Currently, he is also a chaplain in two secondary state schools in Malta and he helps in the Pastoral Liturgy and Biblical Commission at the Curia. 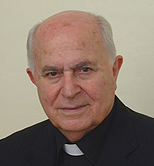 Mons. Victor Grech was born in Bormla on the 19th of October 1929. After graduating from the University of Malta, he was ordained to the priesthood on the 17th of March 1956. After serving as a vice-rector and also as a rector at the Archbishop’ Seminary, in 1977, Mons. Victor Grech was appointed as the Archbishop’s Delegate for the Secretariat, for Diocesan Social and Charitable Action.

A few months later he became the Director of Caritas Malta, and was instrumental in the launching of various intiatives and projects to help the poor and those who were in need of rehabilitation from drugs. After occupying this position for 37 years, he officially resigned in 2014. Mons Grech has been residing in Ibrag for the last 25 years, and says Mass regulary in the parish.